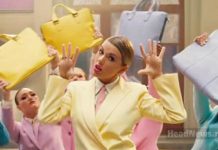 American singer Madonna has released a new album “Madame X”. This is her first album in four years.

“Madame X” is the singer’s 14th studio album, which she began working on in January 2018. It includes 15 songs. Madonna performed one of them in the final of the Eurovision Song Contest 2019 in May.

Before that, the star shared a clip for the song “Crave” from the new album, in which she stars in the role of Joan of Arc.