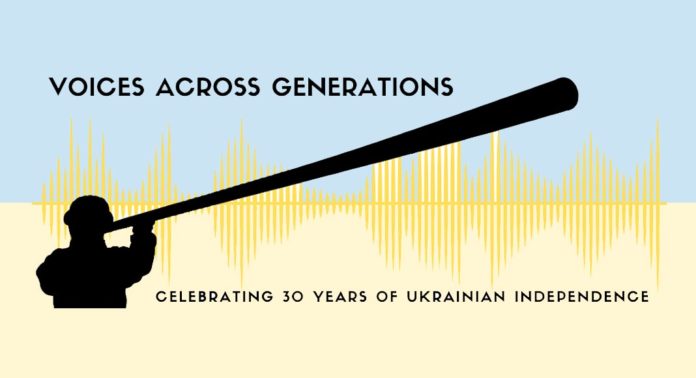 New York, NY: From Friday, March 5  — Sunday, March 7, 2021, the second annual Ukrainian Contemporary Music Festival will explore the role of music in contemporary Ukrainian culture and politics through lively presentations and performances under the theme “Voices Across Generations” to mark thirty years of Ukrainian independence.

Streamed from the stages of the Ukrainian Museum, the Kaufman Music Center, and the DiMenna Center on the innovative Musae online platform, the Festival will provide space to hear today’s most exciting Ukrainian music and to contextualize its place within a broader scope of history and society. Each event of the festival will pair thought-provoking commentary by distinguished scholars of Ukrainian history and culture with a performance of works by Ukraine’s leading living composers, surveying Ukraine’s musical triumphs during contemporary independence. The festival showcases Ukraine’s complex and unique contributions through performances and discussions that explore music’s role in contemporary culture.

The Ukrainian Contemporary Music Festival has adapted to current conditions by switching to an online platform for this year’s events. UCMF believes that even in uncertain times, the core mission of bringing new music to audiences remains. UCMF proudly plays a part in cultural diplomacy on behalf of Ukraine.

The Ukrainian Contemporary Music Festival is made possible thanks to the generosity and cooperation of Razom For Ukraine, the Ukrainian Institute in Ukraine, and UCMF’s many partners.

Streamed from the Ukrainian Museum in New York City

Theme: Voices of the New Millenium

7:15PM: The opening concert will feature a series of composers from Ukraine’s youngest generation. These young artists show a diversity of approaches to contemporary music in Ukraine today from noise music and extended techniques (Kobzar, Loginov) to cartographic composition (Shliabanska) and a series of post-modern styles (Sierova, Mocanu, Kolomiiets). The work of these young composers is complemented by works by two of Ukraine’s most well-known living composers, Victoria Poleva and Oleh Bezborodko, whose pieces employ avant-garde and post-minimalist approaches.

8PM: This evening presents five works by leading composers of the Kyiv avant-garde group. In the 1960s, they created music that challenged Socialist Realism – the only acceptable musical and aesthetic style in the USSR. They maintained contacts with composers in Europe and the US and smuggled books about 12-tone music and scores of the Second Viennese School and Polish modernists, in order to diligently study them and “catch-up with the West.” The result, however, was not a replication of Western European post-war avant-garde, but highly original music, which was valued by the audiences on the other side of the Iron Curtain and scorned by the Soviet ideologues in their native Ukraine.

3PM: This concert will present works by composers of all generations of Ukrainian electroacoustic music, including the “pseudo-concrete” music of Svyatoslav Krutykov, a pioneer of electronic music of the 1960s, pieces by composers from the 1990s and 2000s (Alla Zahaykevych, Ujif_Notfound and Ostap Manulyak) and music by members of the youngest generation who grew up in an independent Ukraine (Anna Arkushyna, Alex Chorny). A wide genre palette of works, including electronic music, works for instruments and electronics, and media art, will allow the listener to feel the individual progress and originality of the modern Ukrainian electroacoustic scene.

Because this year’s festival will be streamed online due to the on-going COVID-19 pandemic, ticket purchases will provide audience members with a link to the concert that can be accessed as many times as you wish once the broadcast has premiered.

An All-Access Pass affords access to all program events across all three days of the Festival, plus some perks such as access to invite-only exclusive events. Tickets are available at bit.ly/UCMFNYC2021.